Allison: Tailoring on-the-job supports to the individual and the workplace 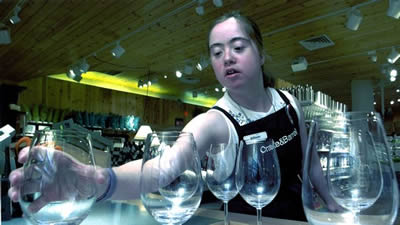 Allison has worked at Crate & Barrel, a retail store selling furniture and housewares, for approximately six and one half years. Prior to working there, she held other jobs in the community but also worked in a sheltered workshop, which she described as "very boring." Her parents have noted that since working at her current job, she has become more independent, more sure of herself, and more outgoing. She has made many acquaintances and has enjoyed using her mall employee discount to shop at other stores. The match between Allison and the employment site was effective due to positive communication and combined supports from both co-workers and the employment support provider.

Allison was hired at Crate & Barrel with the help of her job coach from the Charles River Center, an agency in Boston that provided her adult day services. She became interested in a position at this particular store while she was working limited hours at another store in the mall.

Allison’s employment support staff used a variety of strategies to foster a good relationship with Allison and her employer over the years. While the initial job coaching was very hands-on, once Allison was comfortable, staff gave her and the employer room to work together for her support. However, when difficult situations have arisen, staff from the Charles River Center help work out a solution. An employment support staff person responds flexibly and works with Allison, her family, and the employer to address specific concerns. The employment staff has encouraged open communication through active participation in meetings to troubleshoot as problems arise. For instance, at one point Allison experienced anxiety about her transportation and tardiness, and she was able to talk through these issues by sitting down with her supervisor and job coach. This helped her renew her focus on work. One outcome is that Crate & Barrel staff have helped her learn to problem solve by strongly encouraging her to verbalize any issues that were troubling her.

Her job coach has also educated her co-workers on support strategies and said that they "give her the attention she needs, not in a way that is patronizing, but in a way that’s extremely supportive." Employment staff noted that even when store managers who know her well have left, the support she receives at work carries over to the next manager. This is in part due to the fact that the employer felt loyalty to her as an employee and had a vested interest in her success.

The job coach who has worked with Allison is fastidious about praising the efforts of the employer and acknowledging the work that the staff puts in to support their employees, including Allison. He notes that "you can’t take this kind of thing for granted." Being recognized by the employment staff fosters a good working relationship between the employer and the job coach, which is critical for the continued success of the employee.

Allison has worked two days per week, for several years, earning $8.25 per hour predominantly doing floor stocking but also occasionally helping customers and assisting with bridal registries. Allison described her work as “challenging” and said that her coworkers help her find the right place for items when she needs assistance. Like other retail employees, her hours typically increased during holiday seasons. Her longevity at the job has helped her gain confidence in her skills, increase her autonomy, and create relationships with colleagues. Recently, however, due to the declining economy, Allison was laid off, but her family is hopeful that she may be re-hired at a later date as the economic situation improves.

As Charles River Center staff talked about the experience of supporting Allison, they noted that Crate & Barrel is a workplace that seems to support its employees well overall and focuses on helping employees stay with the company and grow. This practice of targeting workplaces that truly care about their employees is likely to increase the success rate of employment support staff who seek jobs for individuals with disabilities.