Corey: One Person's Hassle is Another Person's Business

Corey Alley, who lives in Millinocket, Maine, loves being out in the community, volunteering for service organizations, and participating in sports and recreational activities. For the past six years, he has provided a service to the town through his business, Alley's Recycling. The business accommodates his schedule and makes recycling a quick and easy process for his customers. 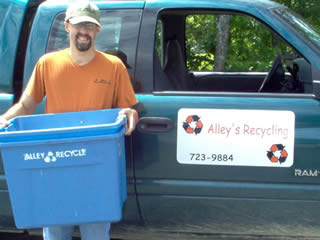 Although Corey had worked in the community before, he never seemed interested in what he was doing or able to concentrate for very long. Having lived in Millinocket all his life, he was becoming known as a person who couldn't stick with a job. However, people who supported him through Katahdin Friends Incorporated (KFI) thought that Corey should try out volunteering. The KFI staff thought that this might be a way to discover what Corey was good at and enjoyed doing.

Staff members made arrangements for Corey to volunteer with friends and neighbors who worked at community organizations. He worked at a thrift store, the food bank, and a transfer station where recyclables are collected. Staff noticed that Corey particularly enjoyed bringing recyclable items to the transfer station, getting to know people there, and sorting the items into different bins. Town residents would watch Corey sort the recyclables and comment that they wished someone would sort theirs.

Corey's team realized his skills and interests could meet a community need. His support coordinator, Peggy, asked if the town would hire him to do recycling, but they could not due to budget cuts. Private trash/recycling companies were also not hiring. So Corey and his team decided to start a recycling business.

Corey's team began advertising in the newspaper and through word of mouth. As residents and businesses became interested, Corey and his team put strategies in place to make sure the business ran smoothly. For example, because Corey communicates through his expressions and gestures rather than verbally, staff dedicated an unused cell phone from KFI to Corey's business so that people could call, hear a greeting, and leave messages for staff to follow up later.

As Corey's business, Alley's Recycling, grew, he made sure to respond to his customers' needs. When people asked him to provide large containers to put their recyclables in, Corey brought them the containers. When customers asked if they could be billed monthly, Corey's business manager, Jan, set up a monthly billing cycle.

As Alley's Recycling acquired more customers, Corey faced a new challenge: transportation. At first, Corey used station wagons that belonged to KFI staff who were reimbursed to provide transportation by the agency. When the business needed a larger vehicle, KFI advertised for a person who could be a job coach for Corey, and who also had access to a truck and could drive it.

This is how KFI found Maynard, a retired town resident who had driven trucks, had some business background, and was interested in working as Corey's job coach. Maynard owned a truck, and agreed to provide transportation for Corey's business.

Corey has been in business for six years. He does all the sorting of recyclables, while Maynard does the driving and helps load and unload the truck. Corey cleans out the containers at the end of each work day, and also helps with mailing customer notices and bills. Jan, a KFI staff member who supports him at home, brings her bookkeeping skills to her role as the business manager for Alley's Recycling.

Corey sorts separate piles of items, such as boxes, to donate to the thrift store and the food bank where he still volunteers. Maynard drives him to those places to redistribute these materials. Maynard also supports Corey to build relationships in the community and do his favorite activities, such as grooming nature trails, hiking, and snowshoeing. Wherever they go, Maynard is always on the alert for people and places with large piles of unsorted recyclables to tell them about Alley's Recycling.

Corey likes to work for short periods of time and in the afternoons, so he runs his business for about three hours a day, two days a week. His team converts his earnings to cash so that Corey can see his savings grow. Corey enjoys his job and the opportunities to interact with people as he works.