Emmitt: How hard work turned an unpaid internship into a paid job

Emmitt is a man in his mid-20s from Indiana. He describes himself as loving, caring, and good at teamwork. Outside of work, he likes to read and participate in the Best Buddies program.

Emmitt currently works as a rehabilitation technician. He transports patients to their physical and occupational therapy appointments, and helps them with exercises to recover from injuries or strokes. Because Emmitt showed such interest in this work and such dedication to doing it well, he was able to turn an unpaid internship into a paid full-time job. 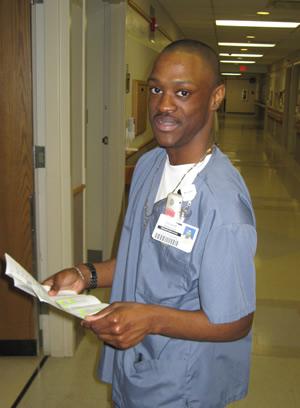 Two years ago, when Emmitt was in high school, he talked to one of his teachers about finding a job where he could work as part of a team. He also said that he wanted to do work that helped people. Emmitt's teacher and his counselor from his services agency referred him to Project SEARCH/Indiana. This is a program that gives students in their last year of high school a chance to work at unpaid internships in different types of businesses. Students also take classes in which they learn skills they will need to work in the community.

When he started working in Project SEARCH/Indiana at Community Hospital East, Emmitt trained as a rehab technician. This meant learning about the different reasons patients need physical, recreational, speech, or occupational therapy. Emmitt learned the proper way to transport different types of patients. He also learned how to help patients do exercises to strengthen their muscles or learn to walk again. He and his supervisor and job coach from Project SEARCH/Indiana found that it was helpful for him to use a board with pictures to learn everything about this challenging job and its strict schedule. As Emmitt got used to the work, he gained confidence and enjoyed himself more and more.

It was clear to Emmitt's coworkers that he noticed what was happening around him and was taking his work seriously. He was determined to learn and was a focused, energized team member. Emmitt had a comfortable, soft-spoken way of interacting with patients. He learned to do some tasks independently. He also learned when to ask for and when to offer help, and was respectful and mature when people offered him assistance he didn't need. Emmitt would take on extra work and come in on his days off. He asked his supervisor if they would hire him, but was told there were no open positions. Nevertheless, he kept a good attitude and strong commitment to his work. By the time a paid position opened up, Emmitt's supervisor had enough confidence in him that she decided to offer him the job.

Emmitt is now a benefited employee who works 30–35 hours a week, usually from 8:30 a.m. to 4:45 p.m., at $9.75 an hour. He works on teams transporting patients to and from their appointments. He continues to help patients with their exercises and with gait-training (learning to walk). He also independently files reports on what each patient was able to do each day. Emmitt's supervisor trusts him to know when he can do a task on his own and when he needs support. Patients and team members appreciate the competent, relaxed way in which he works with them.