Eric: Starting and maintaining a business through a circle of support

Eric lives in Portland, Maine, and describes himself as "helpful, kind and open to anybody." He owns his own business, Eric's Pizza Express, where he sells pizza, sandwiches, and drinks from Anthony's Italian Kitchen, a well-known local restaurant. He does everything from setting up and taking down the cart to serving customers and working the cash register.

For a long time, Eric has wanted to work for himself from his own stand or cart where he could sell food and interact with customers. Eric accessed a circle of support, which included his family, job developer, mentor, and friends, for assistance with starting up his business. 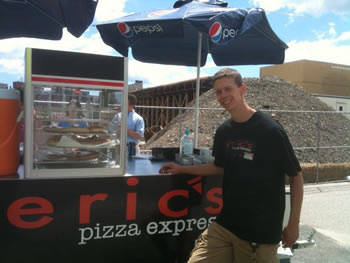 Eric began the process by talking with his Vocational Rehabilitation Counselor about his idea. He also wrote a 14-page business plan with help from a family friend and mentor. Eric and his job developer from STRIVE U, his transition program, observed other vendors. This gave them a clear picture of what is involved in running a food-cart business, and of how much it costs.

A well-established hot dog vendor allowed Eric to job-shadow him. Afterward, his job developer helped him meet with city government staff to learn the regulations for operating a cart. Next, the job developer contacted Anthony Barasso, who owns Anthony's Italian Kitchen and has always supported STRIVE U's programs. Mr. Barasso met with Eric, his dad, and his job developer to discuss the possibility of a business partnership. He liked their ideas and agreed to work with Eric.

Once the restaurant agreed to partner with Eric, he and his job developer set out to generate funds to cover business start-up costs. Eric applied for and received some financial support from Vocational Rehabilitation through a program from the Small Business Administration geared toward self-employment.

Another way Eric got funds was by presenting his business idea to the local Kiwanis Club. Eric's job developer, who is a club member, helped him prepare for the presentation. Eric brought pizza from Anthony's and talked to the club members about his business plan. He asked for the club's financial support through their program to help youth and adults with disabilities become integrated into their communities. The club responded positively and gave him the start-up money. Eric also joined the club.

The next step for Eric was to begin getting materials in place. Through his dad's contacts, Eric found welding students who built a chassis for his food cart and a metalworker who constructed the cart. His father also found the generator to run the cart. Eric paid for the generator with some of the money he received from the Kiwanis Club. Other Kiwanis Club friends bought a storage shed for the cart, and a local business allowed Eric to store his cart on their property.

In exchange for the financial support the Kiwanis Club had given him, Eric agreed to let the club use his cart for fundraisers twice a week. He used the rest of the money from the Kiwanis Club to buy supplies, advertise the business, and pay for the permits he needed to get started. Eric also found an accountant, a friend of the job developer through the Kiwanis Club, who later taught Eric to balance his books for the business. The job developer also arranged a meeting with a benefits counselor so Eric could learn about how his benefits would be affected by this job.

The restaurant owner asked one of his experienced employees to be Eric's job coach, and STRIVE U hired this employee. The owner gave Eric his business name to put on his cart, which he had never done for anyone outside his family. Eric felt very honored and also responsible for doing a high-quality job.

Eric has spent the off-season in school and is planning for his next year in business. He worked five days a week in the summer from about 10:00 a.m. to 3:00 p.m. This included setting up the cart in the morning and putting everything away in the afternoon. Eric's responsibilities include maintaining supplies, serving customers, and working the cash register. Eric and his job coach have set up a checklist of tasks for him to learn one at a time, and he has been very good at accepting the job coach's feedback. Eric still works with the job coach some of the time. The goal is for him to eventually run the business independently and hire an assistant.