Ian: Family Engagement During the Transition from School to Work

Ian lives on Oahu, Hawai'i, and enjoys movies, dance, and karate. He is employed as a courtesy clerk at Safeway. With the support and high expectations of his family, he was able to train for this job while still in high school, enabling a smooth transition into the kind of work he wanted. 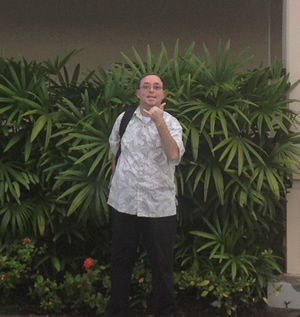 Ian grew up knowing that a job would be an important part of his future based on his experiences at home. He and his brother had lists of tasks and chores they were responsible for completing. Watching him work at home, Ian's parents learned that with supports in place, he was organized, paid attention to details, and liked to work on a task until it was finished. They knew Ian could use these strengths in employment.

Through discussions with Ian's teachers and family friends, his parents realized that family support could help Ian succeed at work. Once Ian started middle school, his parents gathered information from his teacher about services for adults with developmental disabilities. Ian's mom collaborated with the school to include employment in his individualized education plan (IEP). Ian's parents invited an adult services case manager from the IDD agency to participate in Ian's IEP meetings and to help them develop Ian's Individual Service Plan (ISP) http://nichcy.org/schoolage/transitionadult/goals.

Ian's high school curriculum emphasized independent living and community employment. Ian and his classmates learned about appropriate workplace behaviors and routines, and tried out job tasks, first at school and then out in the community.

Beginning in his third year of high school, Ian and his family discussed work after graduation and began identifying the sub-skills he would need to do this successfully. They thought he might be interested in working at a movie theater, because of his interest in movies.

However, Ian turned down that idea and let them know he wanted to work at Safeway instead. He was interested in Safeway because he would have a wider variety of things to do there, and because a friend also worked there. Ian's family respected his confidence in making that choice.

Ian then received training at Safeway for one and a half years during his school day for approximately 8 to 10 hours per week. During this training period, he was given a stipend of $80 per month from the Department of Vocational Rehabilitation. With the support of his parents, special education teacher, and related service providers, including 1:1 adult support and a psychologist, Ian established the goal of learning the tasks required as a courtesy clerk at Safeway. Ian's job training was funded through the Department of Vocational Rehabilitation until he exited from the public school system in May 2010.

After high school, Ian continued to work on his job training goal of mastering the tasks required for his job description. Ian's parents and the adult services case manager arranged for employment support to be included in Ian's ISP, and for Ian's job coach and employment supervisor to be paid through the Department of Health through a waiver from Medicaid.

Ian has maintained uninterrupted employment for three and a half years. He does all the tasks of a courtesy clerk: cleaning, stocking, retrieving and organizing shopping carts, cleaning bathrooms, sweeping, and customer service.

Ian is used to checking his schedule every week to know when he needs to be at work. His job coach supports him for part of every day on cleaning and other challenging tasks. Ian's brother, who works for a service agency, has filled in sometimes for the job coach, and says he can't believe how hard Ian works.

Ian likes having the independence to manage his work and other interests. His co-workers support him when he is working, and management continues to collaborate with his Medicaid waiver employment supports to ensure his continued success in the workplace.

Ian has received a raise, is making above the minimum wage per hour in Hawaii, and has used his accumulated vacation leave for the past two years.