Jared: Full-Time Employment with the Right Expectations and Supports

Jared works at Microtek, a cable-assembly company in Chicopee, Mass. With his family's help, he found an employer who supports his success. 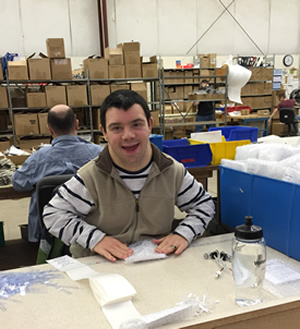 While Jared was still in high school, he and a job developer began exploring his career interests. Jared wound up getting jobs doing dishes in a restaurant and stocking shelves in stores. Jared's working hours varied from week to week at these jobs, which he didn't like. He also sometimes had trouble scheduling rides to and from work.

Jared's parents knew he had other skills and interests and might be able to work more hours. However, they also valued his need to be independent and to try out different work experiences.

Jared and his family learned from his early jobs that he would work best with a regular schedule, on-the-job support, and the chance to focus on one task at a time. When Jared decided to look for a full-time job, his family stepped in to help.

Jared and his parents toured some workplaces together. Jared's mother became aware of Microtek through a friend, and supported Jared to call for an appointment to visit there.

During their tour, Jared and his parents discovered that Microtek was different from Jared's earlier workplaces in ways that would benefit him:

With help from his parents, Jared updated his resume and sent it to Microtek. Microtek agreed to hire him. For the first two months, Jared worked three full days a week. Then he moved up to full-time.

Jared continues to work full-time, earning a full-time employee's wages. He is a fully benefited employee. With support to help him handle the benefits-related paperwork, Jared makes all final decisions about his benefits.

Jared has learned to do many cable-assembly tasks, and relies on the posted instructions to understand the sequence of tasks to follow. He can safely use any of the equipment at the company. He works very well with a stable routine in which he may do one task for half a day, and then move on to another task after lunch.

Jared's mother says that she likes hearing him talk about his work, knowing that he is involved with every step of the cable-assembly process.

Jared has natural on-the-job supports from his line managers and coworkers. He reports that he and his coworkers get along well. He is expected to make his own decisions and be responsible for his own work.

Having set hours has helped him plan his days and deal with transportation challenges. "I am satisfied where I am now," Jared says. "I like to stay on task and to get the job done."