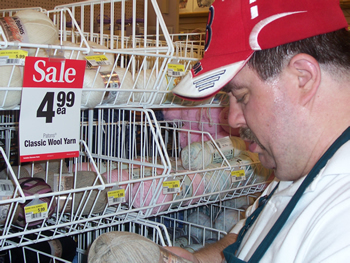 John is 35 years old. He has some experience working at a grocery store and landscaping with his brother, which he enjoyed very much. John also enjoys going out into the community, shopping and cleaning. John has sleep apnea and when he is not on his feet and active, he often falls asleep, as his endurance is very limited. John currently lives at home with his family.

John’s service coordinator from the adult services agency that provides his funding nominated John for a pilot project whereby a team of professionals would be established and a series of planning meetings would take place to create and implement employment goals. John’s mother’s goal for him was to get a job that keeps him active, and his family was very supportive of John working in the community. According to members of the team, John’s mother was a strong advocate for him.

Participation in the pilot began with John’s employment specialist, Coastal Connections in Massachusetts, Inc., his planning facilitator, his service coordinator, and his mother working together by phone to develop initial ideas. The planning process was enhanced by a trained person centered planning facilitator and an employment provider who helped with the job search by going out into the community and making business connections. As John’s participation in his planning process evolved, it became clear that the team held a shared commitment to the goal of obtaining community-based employment and the expectation that John could and would find a competitive job that suited his needs.

At the outset of the planning process, all team members were immediately responsive to John’s needs. Furthermore, they spent some time defining each other’s roles to avoid duplication and increase efficiency. According to John’s mom, the employment specialist handled the job development and the service coordinator kept everyone informed of each other’s activities. Once it was clear that everybody understood and respected each other’s roles, they moved forward.

John’s employment provider began by taking the time to thoroughly assess his skills. As meetings progressed and the team learned more about John’s skills, interests, and the type of work environment and pace of activity that suited him, John’s mom explained that she used to work at a fabric store and still had a connection with someone who worked there. John’s employment provider approached a manager at the fabric store and together they assessed whether John would be a good fit there. At the same time, John tried out other jobs and interviewed in several different locations, but Jo-Ann Fabrics was the one he was interested in because he was comfortable with the tasks and the pace of work there. Throughout the course of implementing each of these steps, the employment provider would give email updates to the group regarding John’s progress. In addition to email, team members stayed informed by routinely communicating over the phone.

The staff person from John’s employment provider is very high energy, which helped John stay focused. He is very personable and negotiated with Jo-Ann Fabrics in more detail. Since staff at the store already knew John (because of his mother) and trusted the employment provider, they were able to carve out a job. In retrospect, it was the combined effort of focused planning, aggressive job development, strong family advocacy, good use of personal networks, and professional collaboration that allowed John to reach his goal.

John is working at Jo-Ann Fabrics, stocking and organizing bolts of fabric and filling bins of yarn. Customer interaction is limited and he is active, both of which meet his needs. He works on Mondays, Wednesdays and Fridays, two hours each day. His mom drives him to work and he uses the Ride to go from work to his day program and to return home. While the long-term goal is to increase John’s hours and enable him to work independently, his health, weight, and need for long-term job coaching are potential barriers. John has also been working with a private trainer at the YMCA and has started to lose weight. All participants agree that John’s health has appeared to improve. He also communicates more with people, develops friendships, and engages himself in conversation in a new way.