Ken: Mastering a job within a growing company

Ken is a 46-year-old man who lives in Seattle, Washington. He has been a devoted Starbucks Partner at the Starbucks corporate headquarters there for the past 20 years. Ken assists with stocking 23 kitchens with teas and condiments. He also conducts weekly tea tastings for his coworkers.

With consistent support from his boss, job developer, and family, Ken has mastered new tasks and skills over time. This has enabled him to adapt to a changing work environment and to succeed at his job long-term. 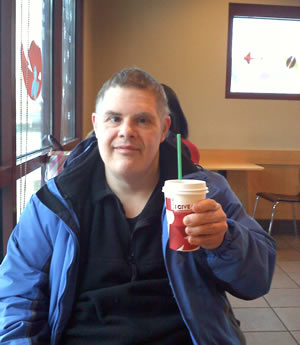 Ken found the job at Starbucks 20 years ago through an employment program for adults with disabilities at the University of Washington. He was hired to fill an open maintenance position at the original roasting plant in 1990, where he cleaned and labeled packages. At that time, Starbucks was a small start-up company. Ken and all the other employees knew each other by first name and formed strong bonds.

A job coach from the employment program supported Ken as he started the job and learned new tasks. The job coach also taught Ken's boss and coworkers how to support him with completing tasks and interacting comfortably with coworkers. With this support, Ken developed a reputation for reliability and a strong sense of commitment to his job.

When the roasting plant became too small for the growing company, Ken transferred to the Starbucks corporate headquarters. He was also given an opportunity to expand his responsibilities. Ken was put in charge of stocking teas and condiments in each of the kitchens on each of the seven floors. His responsibilities also included keeping the kitchens clean. His boss kept the staff at the University of Washington's job-development program aware of Ken's transfer and his new tasks, so that a job coach could support him through the transition.

Working with his supervisor and job coach, Ken mapped out a route that covered all the kitchens and a schedule to ensure that he completed all of the required tasks. The job coach took pictures of Ken's cart to show him how to stock it, and pictures of the kitchens so that Ken would know where to place teas, sugars, and other types of sweeteners. These pictures were particularly important since Starbucks often added new tea brands that Ken needed to know. With the job coach's help, Ken's boss also taught him how to use a two-way radio to report any problems he spotted in a kitchen, such as a leaky sink, to maintenance.

As Starbucks grew, Ken's responsibilities expanded to include more floors and more kitchens. Ken's job coach also found a program where Ken could receive tutoring in reading and math. This helped him to tell time, as well as to identify and count teas.

As Ken gained more confidence working in this new space, he began doing tasks he had observed his coworkers doing, such as fixing paper-towel holders or throwing out old coffee grounds into compost bins. His coworkers and job coach supported him in taking on these other tasks.

Ken's supervisor and coworkers also recognized that the social aspects of work were important to him, so they supported him in learning "soft skills" that would help him connect more easily with others. These included checking in with his supervisor at the beginning and end of his workday, making appointments with others to have lunch, and interacting appropriately with others as they completed tasks.

Ken's supervisor also suggested that weekly tea tastings would help Ken connect with his coworkers. She showed him how to brew a pot of tea, bring it to his coworkers for them to taste, and describe the special flavor of the weekly brew. This venture turned out to be a big success with Ken and his coworkers.

Ken still enjoys his job and tells everyone about it. His work hours are 9:30 to 3:30 four days a week. Ken receives competitive pay, and many benefits including insurance, paid time off, retirement savings plan, stock options and discounted stock purchase plan, a free pound of coffee each week and more. During the daily morning check-in with his boss, they review his appointment calendar. About once a month, he and his boss also review the other rules and tasks he has learned. Ken likes having a routine to follow and enjoys the self-confidence of being employed. He only needs intermittent job coaching. His mother says, "Ken's supervisors take such interest in Ken and such pride in his success. I mean, it's their success as well, and I think they see that."