Emilea: Finding the Resources to Start a Coffee Shop

Emilea lives in a small town in Iowa. She loves spending time with her family and her pets, CeCe and Harley. She also owns and operates her own coffee shop, Em's Coffee Company. With the support of her family, Emilea planned for a career and then used local contacts and several funding streams to start her own business. 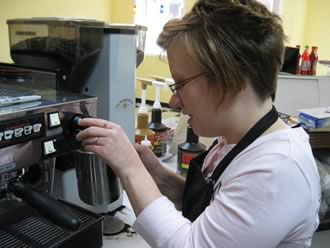 Emilea started out working in a sheltered workshop, but she and her family were interested in community employment. They helped form a group of individuals with disabilities and their families who brainstormed potential job opportunities. The group discussed the option of self-employment. While owning a business can be daunting, Emilea's parents already were experienced at it since they owned a hardware store.

As Emilea, her parents and sister Ashlea thought about ways that self-employment could work for her, they considered businesses that were lacking in their community. One thing the community did not have was a coffee shop, and they knew that people missed the local coffee shops that had recently closed. Emilea liked the idea of interacting with customers at her own coffee shop. She also wanted to learn how to make coffee and ice cream.

Emilea's mother, a small-business owner and one of Emilea's strongest advocates, had a wide community network. A friend of hers, who worked at the Iowa Department of Human Services, put Emilea's family in touch with a benefits planner at Iowa Work Incentive Planning and Assistance. This benefits planner directed them to funds available through vocational rehabilitation. They used these funds to buy equipment for the coffee shop, and to pay for the training and technical support Emilea would need before she could open her business. The benefits planner also connected them with the family of another entrepreneur with a disability who could advise them about getting started.

At this point, Emilea and her family felt prepared to go ahead with the coffee shop idea. Emilea's parents purchased an office building formerly owned by the town newspaper and Emilea rented space in it for the coffee shop. Emilea used grant funds to purchase some materials and furniture. Emilea's mother, assisted by a friend on the Board of Housing, secured another grant, this time from Resource Conservation and Development, a local division of the United States Department of Agriculture. This allowed Emilea to cover payroll for future employees, rent, and utilities.

The coffee shop has a 1950s theme, and Emilea accepted donated furniture that would match the decor. A room for private parties and meetings at the coffee shop, the Newsroom, was dedicated to the town paper and decorated with newsprint tins and old papers.

Before Emilea opened the coffee shop, she used her VR funds to hire a job coach and pay for barrista training at Espresso Partners in St. Paul, MN. The trainer and the job coach made some slight changes to her equipment so she could do tasks more easily. For example, they placed a large sticker on the coffee grinder so Emilea could distinguish the caffeinated beans from the decaffeinated beans. Emilea also learned to listen for audible clues from the machinery while she worked.

Emilea's espresso machine was marked with orange puffy paint so that she would know which button to push for the correct shot of espresso for a small or a large drink. The job coach and Emilea's trainer found smaller frothing pitchers and larger-faced thermometers that Emilea could work with as she learned to steam milk. Before opening the coffee shop, the job coach designed flash cards with words and pictures describing each drink.

VR also paid for Emilea and her job coach to go to Madison, WI for ice cream training through the Chocolate Shop. There they learned the proper way to scoop ice cream and how to clean and maintain the ice cream freezer.

Em's Coffee Co. had its grand opening in December of 2009. The coffee shop is open Monday through Saturday, and Emilea works there 40 hours a week. She arrives early each weekday morning to begin making coffee, clean off the chalkboard for the day's menu, and open the shop to customers at 6:30 a.m.

Emilea is active in every role in her coffee shop – from managing staff to running the cash register and talking with customers in person or on the phone. She has support from a job coach as needed. Emilea's mother does the bookkeeping, and three other employees help with customers and keep the coffee shop clean; two of these employees also have disabilities.

Emilea's mother says that although there have been stressful times, Emilea has grown a great deal from this experience. Emilea's success has also inspired the family members of other individuals with developmental disabilities to help them pursue employment. This includes the town's newspaper editor, whose brother has Down syndrome, and a woman whose son has autism and wants to be a chef.